We’re like a family here at Shadow, and we love to see our employees grow and achieve their goals. Here’s the story of Juan, a workshop assistant who became our Head of Production, and is now setting up our new Madrid office… 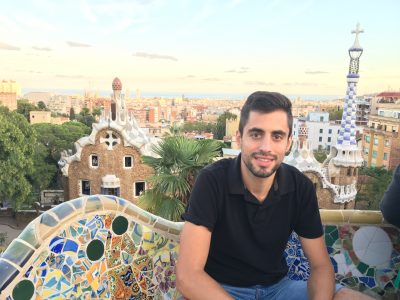 “I grew up close to Madrid in a town called Valladolid. If I lived again, I would have left my town sooner, perhaps tried studying on Erasmus, but I decided to stay and get my degree in my home town. I studied Industrial Engineering, specialising in mechanics and building structures. I always passed my exams, and I stayed in the same place for a long time. One day, my best friend told me that they were going to London to study Dance, so I thought I’d go along with them – that next day I bought a ticket to London. I stayed with my cousin for a couple of weeks before getting a room share with two other people, and took a job in a popular McFastFood chain. It was horrible, the worst experience for me, but I learnt a lot. I was privileged to work with people from all over the world, but on the flip side – I had hamburgers thrown at me!

“I went to a party with some colleagues, and by chance I met a guy called Armando who worked for a robotics place called the Shadow Robot Company. I wanted to leave the fast food place and seek a new opportunity at Shadow! It should have been easy to leave, but it was fraught with legal complications, and I took them to court (and won). It wasn’t a happy time, however I know I’m privileged, and a huge part of my story has been an adventure to me.

“In January 2011 I started work at Shadow. Even though my degree was in engineering, I had no robotics experience. For the first three months, I didn’t want to touch a robot! I thought I’d break them! I started as a Workshop Assistant, working for 8 hours a day wearing ear protectors using a milling machine. It was noisy and monotonous, but I was so happy to do it compared to my last job! I stayed doing this for a couple of years; during this time I learnt a lot about the philosophy of Shadow – everyone is available to help you. They treat employees so well. It was so different from my last job – that was like the night time, Shadow was the light of the day.

From milling to management

“My role evolved, and I was tasked with developing a quality system to test the reliability of the product. I started to understand more about the robots. I’m not an expert, but I now know a bit of everything! So I was the Quality Engineer for a couple of years, but by the end of 2013, I started to really dislike the weather of London. My friends thought I was ill because I was so pale! So I took a break and spent a month in South America. It really recharged my batteries. When I went back in January 2014, I became the Production Manager. I began to do more things in my role, I got to travel to visit clients, go to conferences, lead the production team.

“In Autumn 2015, I wanted to go home to Spain, so I started to commute to work from Madrid (I’d work from home on Mondays and Fridays, and on Tuesdays I’d leave home at 4am and get to work in London for 10am, then leave on Thursdays at 8pm before arriving home at midnight). I have to say a huge thanks to my friends who have supported me and let me stay with them when I’m in London. Especially to my friends at Shadow.

“What do I like about Shadow? Everything! I love Shadow, I love the philosophy here. I love the tech we have, the people, the fact that everyone helps and teaches everyone else (which is hard to find in bigger companies). Everyone talks to everyone, you can chat to the Managing Director over a pint in the team meetings, it’s really open.

“2017 is an exciting year for us, as we are opening a new Shadow office in Madrid. I’ll have the chance to build an office from scratch, it’s a real challenge, and I love that. I’m looking forward to building rapport with other companies in Spain, building a hub of robotics knowledge. We’ve just found our office which is in the heart of Madrid. I’m going to live properly in my country, but still get to work for my dream company. My friends can’t believe it, they think I’m the luckiest person in the world!”