From 21st to 28th September you would have found us in the Vancouver Convention Centre in Canada, talking about our favourite subjects…robots. We visited two events, ROScon and IROS – both of which are ‘must-attend’ events for us.

ROScon is a two-day event that acts as a precursor to IROS. It’s a chance for ROS developers of all levels, beginner to expert, to spend an extraordinary two days learning from and networking with the ROS community, getting tips and tricks from experts and meet and share ideas with fellow developers.

Our Chief Technical Architect, Ugo Cupcic, spoke at a session, entitled ‘We Built an Open Sandbox for Training Robotic Hands to Grasp Things’. His talk went down very well, lots of people in attendance listening with enthusiasm (and after his talk, he was surrounded by a crowd of people quizzing him about his work at Shadow – which is always a good sign that the talk went well!). 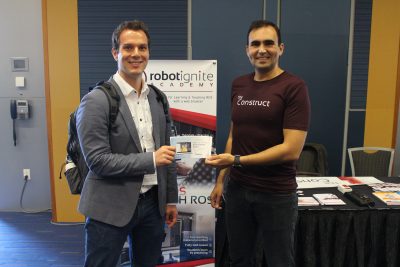 We also caught up with the good folks at The Construct, as they have incorporated our Sandbox into one of their courses! So cool!

IROS (The 2017 IEEE/RSJ International Conference on Intelligent Robots and Systems) is the main event – a five-day extravaganza that explored the theme of “Friendly People, Friendly Robots”. Robots and humans are becoming increasingly integrated into various application domains. We work together in factories, hospitals and households, and share the road. This collaborative partnership of humans and robots gives rise to new technological challenges and significant research opportunities in developing friendly robots that can work effectively with, for, and around people. 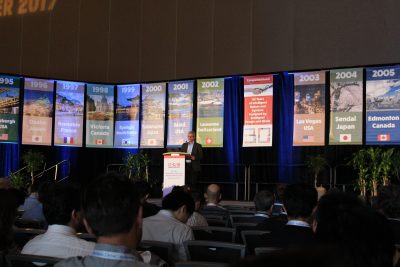 Like at ROScon, there were many workshops to attend. Andriy commented ‘I particularly found interesting the concept of “Micro-Data: The New Frontier of Robot Learning?”. The speaker said that we should have a hybrid approach between a strict model incorporated in software and neural networks which have some hidden and unobvious logic.’

It was great to head out to Canada and catch up with the ROS community and see all of the exhibitors at IROS. You can count on us to be the first to sign up for next years events!