Have you seen this article on The Guardian? The iPal robot launched at RoboBusiness in California last week and is causing quite a stir.

According to Avatarmind, the company that created the robot, the iPal is a 3ft tall companion robot for children aged 3-8 years old. It has a tablet on it’s chest which children can interact with; one of the best uses of the robot is as a teacher – the iPal will answer those tricky questions (for example ‘why do we hiccup?’), however if the robot doesn’t have an answer, it passes the question on to a human at Avatarmind who will respond with the answer, and therefore growing the iPal’s knowledge along the way. 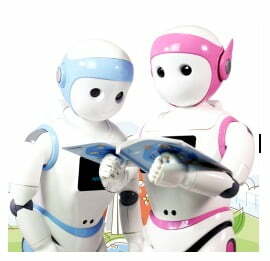 iPal also has the ability to monitor your child, allowing you to message or video chat with them. Speaking to the Guardian earlier in the year, Professor Noel Sharkey (Emeritus Professor of Artificial Intelligence and Robotics at the University of Sheffield) said “robots are a great educational tool for children. It inspires them to learn about science and engineering, but there are significant dangers in having robots mind our children. They do not have the sensitivity or understanding needed for childcare.” and when Julia Carrie Wong of the Guardian pressed him about the iPal, his message was clear: “This is awful.”

However, Professor Tony Prescott of Sheffield Robotics, speaking at the London Innovation Summit 2016, said that robot companionship would be better for you than interacting with a screen. Our MD, Rich Walker, said that socially anxious children could even go on adventures with their companion robots.

The iPal has large eyes but an empty face – a look made popular by Hello Kitty (whose creators purposely didn’t add a mouth so that the viewer could project their emotions onto her, this way Hello Kitty is always reflecting our mood). The iPal seems to be a high-tech version of ‘My Size Barbie’ (a 3ft tall doll); it is perhaps an almost natural progression to pop a screen on a toy like that and bring it to life. But what do you think? Would you prefer your child to play with an iPal or an iPad?