Today we reluctantly say ‘a bientot’ to our amazing friend and colleague, Kirsty. After nearly two years at Shadow, she’s upping sticks and moving across the pond to Canada. In between selling her excess belongings and finishing her work, we had a chat about her time here…

“I’ve been a Software Engineer at Shadow since March 2015. When I started out it wasn’t my intention to work in software – in fact my parents own a farm, so my plan was to go to agricultural college to learn about mechanical engineering and develop diesel engines, stuff like that (plus I’d just bought a vintage Beetle called George – my dad was vocal in telling me I had to learn to fix it myself!).

“I ended up studying in Glasgow, and got round to thinking about a PhD. Loughborough University got in touch and I went down there to work on it (‘Solving Vibration Issues in Golf Simulating Robots’). I hated it at first, but started learning about coding and really loved it. I really enjoy the problem solving aspect of it.

“I realised that I wanted a job where I could sit and code all day, but I had a lot of catching up to do as coding wasn’t my speciality. A recruiter got in touch with me and mentioned a position in Cambridge where  I could develop hardware, work on network routing, and do a bit of software too. I took the job, it was great learning more about coding but I wanted to move on as the rest of the work was kind of repetitive, plus I wanted to move to London. 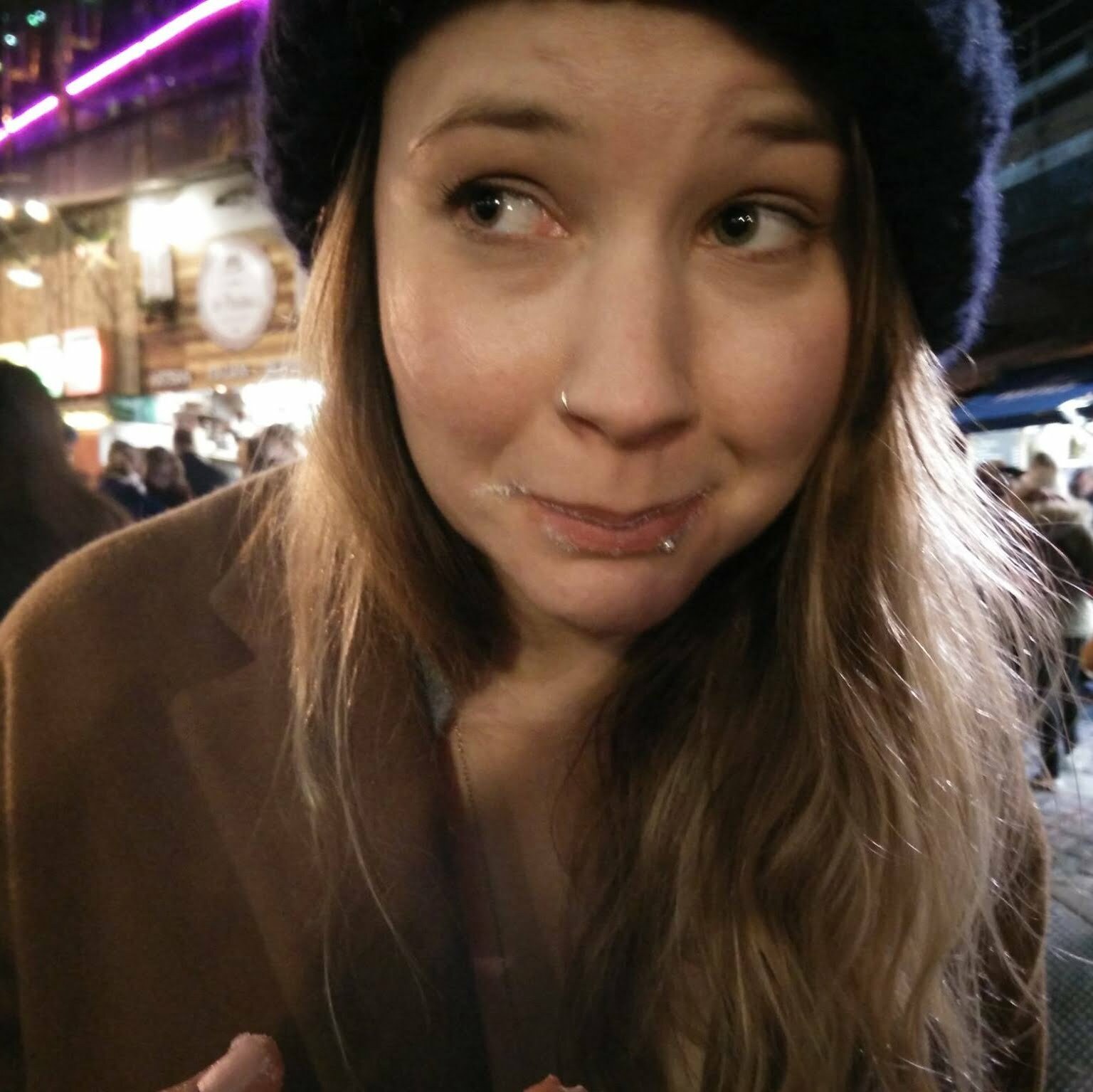 Kirsty, after a sugary donut

“It was sheer luck that I saw Shadow’s advert for Software Engineers. I’d known a bit about the company, ‘cos when I was studying for my PhD I had done some research on the Dexterous Hand. I looked at the ad and thought it would be my dream job, but didn’t feel qualified for it, you know? I felt like that would be the place I’d work in a few years time once I’d had some more experience. But I was offered an interview, went along and thought the company was absolutely awesome. The office is all higgledy piggledy, there’s bits of robots everywhere; it’s kind of messy, but mostly like a crazy inventors lab. I love it!

“So I’ve been here coding since then. My job at Shadow is fun, I really like playing about with the robots! As much as I love it at Shadow, I wanted a different lifestyle. I wanted to go somewhere where I could do my work but be surrounded by immense natural beauty…It was a hard decision to come to, but I eventually made up my mind to move to Canada, and I fly out there tomorrow! I’m going to work at a VR studio. I’m really excited but a bit daunted at the same time – my French isn’t so good, plus I had to sell George!

“I will miss everyone at Shadow, I have never worked with a nicer bunch of people, and I don’t just consider them colleagues, but friends also. I love how when we have a ‘pint and chat’ (our monthly team meeting), it’s super chill and you feel like you can say anything to anyone. I never miss a pint and chat! We have freedom in our work here at Shadow, plus we have ‘one to ones’ every 2 months which gives us a chance to have a rant or make suggestions, I find them really useful and changes are definitely made based on the things we talk about in these one to ones.

“A highlight for me was within a couple of months of starting I got to go to Seattle for a conference and a delivery. It was AMAZING. We all had a great time, really bonded. It was a great combination of seeing a different city, travelling, getting to know colleagues working hard towards a goal, long exhausting hours followed by oyster dinners.

“What will I miss about Shadow? All the people, thai wednesdays, pint and chats, Denise’s mini breakdowns, Andriy looking menacing on AppearIn, Rich’s insane enthusiasm about everything, Armando’s casual wear, Monika’s singing, Sherrine’s outfits, Dan’s obsession with making the loudest high voltage generator, Rob’s willingness to go for a pint – always, Matthew’s sneezes, Hugo’s dancing, Nick’s cheery face, Juan’s face that day that Appearin froze when he was mid yawn, Gavin’s ability at organising the most unorganised people, Luke’s knowledge of the best places to rave, Ralph’s tiny cups of tea, Beatriz’s patience no matter how many questions you ask, Oktay’s generosity, Rebecca’s great hair, Richard’s absolute passion for inventing, Ugo’s stories about his ridiculously cool lifestyle, Toni’s refusal to give up Spanish time, the making skills of the guys at Leroy house and their ability to avoid the 251 crew