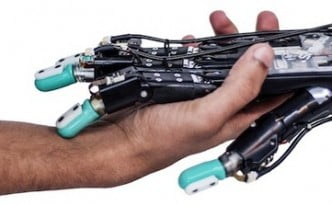 Congratulations to Syntouch who only two months after being selected as a World Economic Forum Technology Pioneer, have this month been awarded Popular Mechanics’ Breakthrough Innovator Award.

“LOS ANGELES, California, October 11, 2013 – SynTouch LLC, developer and maker of the only sensor technology in the world that endows robots with the ability to replicate – and sometimes exceed – the human sense of touch, has been awarded a POPULAR MECHANICS Breakthrough Innovator Award.

Gerald Loeb and Jeremy Fishel have won this award for developing the BioTac®, a sensing technology that mimics the tactile abilities and features of the human finger. “We aim to facilitate the evolution of robots to adaptable and human-like models that function well in unstructured environments with imperfect movements. The BioTac will pave the way for a new generation of industrial, medical, and military robots, as well as prosthetic limbs,” said Dr. Gerald Loeb, CEO at SynTouch.”