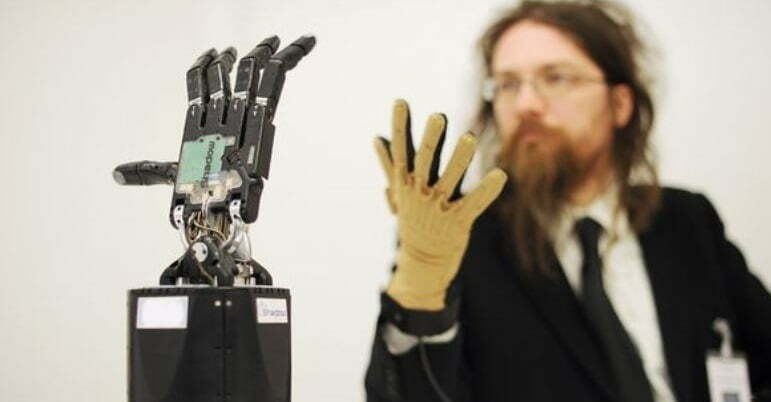 Shadow’s Dexterous Hand is the most advanced of its kind in the world, reproducing, as closely as possible, the kinematics and dexterity of the human hand. Featuring 24 joints driven by 20 motors, 40 strain gauges, 25 temperature sensors and pressure sensors on each fingertip, the robotic hand excels at gripping and manipulation. Strong enough to hold the cable tethering an astronaut to his spacecraft but sensitive enough to handle an egg, Shadow’s technology is designed to take human operators out of harmful situations – such as nuclear decommissioning or bomb disposal.

The Dexterous Hand can be controlled by a CyberGlove, worn by an operator, creating exciting new opportunities for ‘teleoperation’, where the user controls the robotic hand from a distance. The company demonstrated this capability recently during a collaboration with an operator in California guiding a hand located at Shadow’s London HQ. They were able to ‘feel’ the sensation of the robot hand touching an object, 5,000 thousand miles away, thanks to the fingertip sensors on the Shadow device relaying information to controller’s haptic feedback gloves.

Rich Walker, Managing Director at the Shadow Robot Company says, “this kind of technology will soon allow remotely operated robots to be used for all kinds of sensitive tasks, such as bomb disposal, nuclear decommissioning, space exploration, and construction. These can all be made safer for humans and, in other sectors, increase productivity which is a core component of the government’s industrial strategy.”

Having witnessed the Shadow Robot Company’s robot hand in action, Chris Skidmore, Minister of State for Universities, Science, Research and Innovation said, “Shadow Robot Company is launching the world’s first telerobotic hand; an impressive advancement in technology which can replicate human movement in real time. Through our innovation loans we are backing new ideas – like this one – that could change the way we interact with the world. The Government wants the UK’s expertise in robotics and technology to create jobs and growth throughout the country. Through our modern Industrial Strategy, we aim for investment in research and development to reach 2.4% of GDP by 2027 – the biggest increase in public investment in R&D in UK history.”

Tim Sawyer, chief investment officer at Innovate UK added: “Shadow Robot Company represents the cutting edge of UK leadership in the crucial industrial sector of robotics. Innovate UK is proud to support the company’s ambitions to thrive in a global market that is estimated to be worth between $1.7 and $4.5 trillion by 2025. By using loans to support innovative businesses at the right time we can be most useful for innovations that are near to market.”

The Innovate UK grant will help the Shadow Robot Company to explore new commercial opportunities created by the alliance of robotic grasping and manipulation, with rapidly developing AI and virtual reality systems.

Rich Walker says: “We’re thrilled to receive a loan which complements the government’s Going Global vision to position the UK as a hub for outstanding tech and talent. The loan will help us to make key technological advancements and we’ve already hired a recruit to help with analysing market sectors, developing use cases and enhancing our technology delivery strategy.”

The Shadow Robot Company is one of the UK’s leading robotic developers, experts at grasping and manipulation for robotic hands. Shadow has worked with companies and researchers across the globe, looking at new ways to apply robotics technologies to solve real-world problems. They develop and sell the Dexterous Hand, recently used to advance research into AI, and the Modular Grasper, an essential tool for supporting industry 4.0. Their new Teleoperation System is being developed for the AVATAR X space programme (their third space collaboration after NASA and ESA) and can be deployed in nuclear safety and pharma labs. www.shadowrobot.com

Innovate UK is part of UK Research and Innovation, a non-departmental public body funded by a grant-in-aid from the UK government. For more information visit UK Research and Innovation’s website. We drive productivity and economic growth by supporting businesses to develop and realise the potential of new ideas, including those from the UK’s world-class research base.